Andrea & Laurence Davis and Costa Concordia in the Media

This will be the first and last video footage, of the exact area depicting our memories of the last hours on the ship, before it is towed away over the next few weeks and turned into scrap. We pray that the removal of the wreck will ultimately follow with the conclusion of the Captain’s trail and bring closure to all these ghostly memories for ourselves and fellow survivors of the Costa Concordia, as well as for the families of those who lost their lives during this unforgivable disaster.
We look forward to celebration for the Islanders of Giglio, and hope they too will build up new beginnings, beauty and serenity and welcome tourism back onto their magnificent island. We think of our rescuers and friends of Giglio. 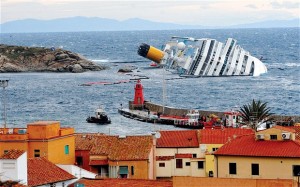 CALGARY — A Calgary couple on board a massive cruise ship that ran aground off the coast of Italy plunged into the water and swam to shore, fleeing the sinking luxury liner.

Laurence and Andrea Davis were among the 12 Canadians on board the Costa Concordia shipwreck that left five people dead and more than a dozen others still missing.

They described a confusing scene as they related their harrowing account to loved ones back in Calgary.

The Davis couple were up to their knees in water in their lifeboat when they made the decision to jump, said their son-in-law, David Hornstein, in Calgary.

Laurence swam backstroke, keeping an eye on the towering ship, concerned it might tip over on them, Hornstein said.

The couple made it safely to shore and immediately located a phone to let their loved ones back home know they had survived.

“It was pretty traumatic, pretty frightening,” Hornstein said as he related the couple’s tale.

“They lost everything. They really just had the clothes they swam in.”

The couple spent Friday night in an emergency centre set up in a local school. They are now at a hotel in Rome and are booked on an early morning flight Monday back to Calgary, said Hornstein. “They’re doing well right now. They’re on an emotional roller-coaster for sure. They’re spending five minutes laughing or five minutes crying. It sounds like they’re emotionally quite worn.

“It will be nice to have them back home.”

Survivors have related a chaotic scene when the cruise ship struck rocks off the Italian coast. An evacuation was delayed 40 minutes and there have been reports of malfunctioning lifeboats.

Laurence Davis, 60, and his wife Andrea, in her early 50s, had just wrapped up a visit with family in South Africa when they decided to wind up their holiday with a cruise, said Hornstein.

When the rocks ripped into the ship, the couple got into a lifeboat but it apparently wasn’t lowering into the water correctly. When it started flooding, the couple decided to jump.

“There was no direction from staff. There was a lot of confusion,” Hornstein said.

“Laurence did a back crawl while Andy was doing front crawl. He said he couldn’t help but look back. The boat was tipping inward toward land, the way they were swimming. He was worried it was going to come down on them.”

The couple escaped with just bruises and scratches.

They were able to borrow a cellphone and call their daughter, Leora Hornstein, said her husband.

“It was a three minute conversation just to tell us their ship had sank and they were OK.”

On Sunday, two South Korean honeymooners and an Italian crewman were rescued from the wreck, but emergency services found another two bodies, bringing the death toll from the disaster to five.

Rescuers were still hunting for more than a dozen people missing after the Costa Concordia luxury liner hit submerged rocks just off the Tuscan island of Giglio on Friday night with more than 4,200 passengers and crew on board.

But they said the search in the half-submerged ship was highly dangerous because the decks were at almost a 90-degree angle and there was a risk that the ship could slip off the rocks it had struck and sink altogether.

Screaming and crying, a hapless crew, and a dive into the water—as the prosecution wraps up its case against the Costa Concordia’s captain, The Daily Beast talks exclusively to two passengers who wish they could tell the court what really happened.
“Time was endless, panic was amplifying, fear and confusion was overwhelming,” remembers Andrea Davis, one of the 4,229 people on board the Costa Concordia cruise ship on January 13, 2012, when it crashed into rocks off the Tuscan island of Giglio, killing 32 people. Davis will not be one of the 25 passengers giving testimony on Monday and Tuesday against Francesco Schettino, the erstwhile captain of the doomed cruiseliner who is standing trial for manslaughter, abandoning ship, and causing a maritime disaster, but if she had been called to testify, she says she would tell the court that surviving the crash was the easy part.Davis, who wrote a book about the disaster and her subsequent struggle with post-traumatic stress disorder called Survival Was Only the Beginning, says she and her husband, Laurance, were self-described “cruise junkies” before the accident. They boarded the Costa Concordia in Barcelona, Spain, for a seven-day cruise to celebrate Laurance’s 60th birthday. They had been on the cruise for four days and were dining with friends when the ship hit the rocks. She says she heard “crash, crunch, and the sound of scraping noises.” Then there was total darkness.

She describes hearing “screaming and crying, glasses and breaking bottles tumbling, wine glasses shattering, wine and food everywhere.” She and her husband crawled on the floor, ducking as “falling glass, chandeliers, plates, food, and drink” fell on top of them.

They didn’t have time to go back to their cabin to get their life jackets, so they hovered around the customer service desk waiting for someone to help them. The crew didn’t know what to do, so busied themselves with battening down the furniture as passengers panicked around them. “We watched them taping computers, monitors, and massive vases and equipment to the desks as the ship listed further and further,” she says. “There was no instruction, no direction—there was an overwhelming stampede and hysteria.”

Davis and her husband then gave up on the crew and instead made their way to the lifeboat muster stations on Deck 4, fighting “against gravity, objects are flying, people scrambling, bodies knocking down like tenpins, bones breaking, doors off hinges, faces through glass panes.”

They made it to the “top,” or port side of the listing ship, but all the lifeboats there were full. Then they struggled to make it to the lower side of the same deck, but again, there was no space in any of the boats for them. Terrified for their lives, they watched and waited for someone to save them as the ship kept coming down above them. “It was cold, our feet and pants were wet now,” she remembers. “We could see shoes and debris floating around. The sight of the large C representing Costa on the center chimneystack was falling on top of us…For us, there was no way out. Together we decided it was either sink or swim so…splash.”

It was that moment, at 12:10 a.m., that Laurance’s watch stopped working, more than two hours after the ship struck the rocks. They swam in the direction of the lights of Giglio, not knowing exactly what they were swimming toward. They finally made it to the rocks off the island near the wreck, where they waited until rescue workers and islanders found them. “My feet were shredded and cut,” Davis told The Daily Beast. “I did not know I was hurt. My feet were things at the bottom of my legs. One of the rescuers stripped off his sweater, grabbed a stone, and cut off the sleeves…they tied these threads over my lacerated feet.”

Like so many other passengers on the ship that night, Davis still struggles with the aftermath. She says that two and a half years later, she can only think in terms of “life before” and “life after” the accident. “Life will never be the same again,” she says.

But she also is disappointed by the way Costa Crociere, owned by Carnival Cruise Lines, has handled the situation. “To date, we have not been questioned by Costa as to how we got off the ship, what our circumstances were during the time and immediately following the accident,” she says.

The sentiment has been echoed by scores of other passengers who blame Schettino for the accident but who believe he is not the only person accountable for the aftermath. Benji Smith, another passenger who is not testifying this week who also wrote a book on his experience, called Abandoned Ship, says he and his wife forgive Schettino. “On the night of the shipwreck, Captain Schettino made a sequence of bad choices: He sailed too close to the shore. He lied to the passengers and to the Coast Guard. Then he fled the scene, while hundreds of people—including me and my family—were still aboard a sinking ship,” Smith told The Daily Beast. “Nevertheless, we recognize that everyone makes mistakes, and few of us have had our mistakes on such public display. Captain Schettino has been publicly humiliated in front of the entire world. Whether or not he goes to prison, he’ll certainly never captain another ship. His previous life is over. As for us, we forgive him.”

Smith instead says he feels that the prosecutor has paid far too little attention to the corporate executives at Costa and Carnival. “Just like the captain is ultimately responsible for his ship, the corporate leadership is ultimately responsible for the fleet,” he says, pointing to the $1.7 million bonus Costa CEO Pier Luigi Foschi received when he retired in 2012, despite being in charge when what is arguably one of the worst passenger accidents in history happened to his fleet. Foschi, who was in Guadalupe a the time of the accident, testified against Schettino in March. “The company is not responsible for what happens on board the ship,” Foschi told the court. “For us, the ship should have never been in that place at that time on that night. We entrust the ship captain with full responsibility for the ships.”

Many of the passengers disagree. “Even if Captain Schettino bears the personal responsibility for the sinking of the Concordia, none of this would have happened if there had been a modicum of oversight from the corporate executives at Costa and Carnival,” Smith told The Daily Beast. “After all, this wasn’t the first time Schettino executed risky shallow-water maneuvers, and Costa headquarters never intervened. The evidence seems to suggest that the Costa fleet had a culture of alcoholism, drug abuse, sexual assault, and malfunctioning equipment, on top of their lackadaisical safety standards.”

Smith says it is a travesty of justice that Foschi and other executives like him “awarded themselves millions of dollars in bonuses” while withholding just compensation from the victims and making Schettino the scapegoat. “The captain has had to answer for his crimes. Why are the executives immune?”

Dozens of passengers will testify in Grosseto on Monday and Tuesday to wrap up the prosecution’s case. Then technicians and experts and possibly even Schettino will testify for the defense throughout the summer. A verdict is expected before the end of the year. Schettino faces a 20-year sentence if he is convicted.

This video was shot at the location of a tragic accident. It is not our interest to gain attention on the backs of those who have lost loved ones. 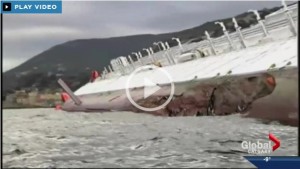