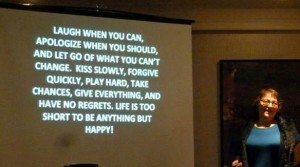 Laurence and Andrea were both born in Johannesburg, South Africa and immigrated to Calgary with three of their four children in 1997.

Today they have three Grandsons in Calgary and a beautiful Granddaughter in Johannesburg.

Laurence started his work career as a Diamond cutter for 10 years and later joined the insurance industry focusing on Life Insurance, Health as well as Financial and Investments.  He has been a top achiever since joining the industry in 1990 in South Africa and later Sun Life of Canada and remains highly committed in the best interest of his clients.

Laurence has been an avid road runner for 33 years, having completed 49 marathons, 3 Iron Man events and 8 Comrades Ultra Marathons, a distance of 90 kms each.

Andrea too, started her working career in the Diamond Industry in Johannesburg.  Since living in Canada, she began a successful career in Marketing and Advertising and incorporated her Promotional and Branding company, BallyHoo Concepts in 2003, celebrating her 10th year in business this August.

Together Laurence and Andrea love travelling which takes them away from their busy daily routines.

Their love of life and nature encourages them to travel to exciting global destinations.

Both before and after their trauma on The Costa Concordia, their love for cruising is what they look forward to most when planning vacations.

They are excited to share with you their adventure on The Costa Concordia, followed by their  incredible decision to return to the scene of the disaster only six months later where they met up with their rescuers  and thanked the people of Giglio.

Andrea is excited to have recently published her first book,

Survival Was Only The Beginning – A Costa Concordia Story.

She is also a member of the Canadian Association of Professional Speakers.

Andrea has presented numerous talks and Key Note presentations on this topic as well as powerful motivational lessons learned.

This site uses Akismet to reduce spam. Learn how your comment data is processed.